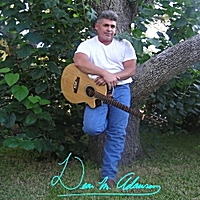 Dean was born in Huffman, Texas in 1966 and is now a Fulton, Texas native on the beautiful gulf coast. He moved to Austin at an early age and was always taken with the diverse music the city had to offer and this was when he first realized his passion for becoming a musician. In his early 20s as a merchant marine, he spent all his free time on the ship learning to sing and play guitar.

When Dean left the merchant marine, he returned to Austin where he started performing at various venues including Willie Nelson’s Lighthouse, Threadgills, Babe’s and the Texas Chili Parlor to name a few.

After moving to Fulton he started performing in Corpus Christi and various other towns in south Texas. Although a dedicated family man and a father of two, Dean spends every free minute either writing songs, practicing or performing at various venues in south Texas. Dean has an excellent ear for music and is a very talented artist.